Area 51: Site 4 is a light gun arcade game developed by Atari Games in 1998, and sequel to the original Area 51, picking up where that game left off. Though the graphics have been improved, they rely on the same FMV streaming technology as the original and the gameplay remains largely the same as the original game. The game is broken down into two big menus: field exercise and adventure. The training levels are based on brief missions where the player must complete all "training challenges" and the "real mission" (in either order). Completing all the training challenges will involve shooting zombies that are contained in the labs, shooting giant maggots trying to burrow into sick patients in an infirmary, protecting a bus from aliens trying to roll it over, and destroying alien ships, turrets, and missiles. In the final mission, the player must go into a huge warehouse to destroy a giant red alien with multiple limbs. After the game is beaten, the player turns into an alien.

After the game is beaten, a short sequence of clips are played involving STAAR members, ending with the message, "S.T.A.A.R. Wants You!" similar to the real-world Uncle Sam army recruitment posters. The intro is only seen in attract mode as an intro loop. The end credits can only be seen after playing without putting initials. 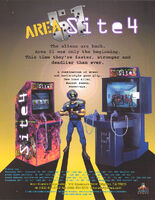 Add a photo to this gallery
Retrieved from "https://area51.fandom.com/wiki/Area_51:_Site_4?oldid=4780"
Community content is available under CC-BY-SA unless otherwise noted.