BlackSite: Area 51 (released in Europe and Australia as BlackSite) is a first-person shooter video game, released for Xbox 360 and Microsoft Windows on November 12, 2007 in North America, and PlayStation 3 on December 10, 2007. The game is mostly unrelated to the 2005 multi-platform game Area 51. The game was developed by Midway Austin and published by Midway Games.

The game begins in Iraq, with protagonist Captain Aeran Pierce and his Delta Force Echo Squad (consisting of Lieutenant Logan Somers, Corporal later Sergeant Cody Grayson and Sergeant later Lieutenant Mitchell Ambrose) on a mission to investigate an underground bunker where W.M.D.s are supposedly stored. The team is assisted by the head of an elite science team; Special Operative Doctor Noa Weis. After battling through Iraqi Republican Guardsmen, Echo Squad reaches the top-levels of the facility where the weapons are supposedly kept and enter, and soon battle horribly mutated humans and alien creatures (later classified as "Xenos") infesting the top levels of the facility. The team wonders where they came from, but Weis declares the matter classified and dismisses the humans' mutations as a serious case of encephalitis. Deep under the facility, Echo Squad splits up, with Pierce, Somers and Weis going on to the weapon storage area

What they find is a strange crystal-like alien artifact (later revealed to be a segment of the main artifact from the Roswell UFO Incident, which was stolen from Area 51 and sold to the Iraqis). Despite Weis' warnings, Somers touches the crystal, sending out energy pulses that affect Somers and Weis while knocking Pierce out cold. Drifting in and out of consciousness, Pierce is dragged away from approaching Xenos to the elevator by Weis, while Somers holds the Xenos back. Weis is unable to wait for Somers, despite his screams for her not to close the door, and instead seals the room, trapping Somers in with the creatures as they begin to close in on him. Pierce and Weis rejoin the others, and relate Somers apparent death, before escaping the facility.

Three years later, Pierce is summoned to BaseCamp, a U.S. military base garrisoning the U.S. 4th Infantry Division under the command of Colonel Dale Green. Green, Pierce's superior officer, explains they need the help of Echo Squad with a situation in Nevada: A heavily-armed militia has taken control of the decommissioned military base at Groom Lake (Area 51) and they have been chosen for this assignment because Xenos have been seen around Rachel, Nevada; the town closest to the base. Fighting their way to Rachel, Echo Squad is attacked by both Xenos and the "militia", who are revealed to be heavily armed, cybernetically augmented soldiers known as "Reborn" (who are found to have U.S. dogtags).

Upon reaching Rachel, Echo Squad meets up with surviving members of the U.S. 4th Infantry Division sent to attack the town, and do their best to protect the frightened survivors from the un-natural Reborn. It is here Grayson discovers something very shocking... Logan Somers, alive and well, but appearing similar to the Reborn. Somers explains to his greatly surprised comrades that he survived the incident in Iraq only to be "disappeared" by the U.S. military and forcefully recruited into the Reborn Program. Somers explains the Reborn Program is the black-ops research & development program put in motion by the U.S. Government to create the ultimate army of soldiers for impending wars with other nations. It is done by secretly kidnapping and testing on "undesirables", negating the need to forcibly draft people into service and avoiding the stigma that only lower-class families are targeted for service. "Undesirables" originally were made up of homeless people, illegal immigrants, and captured enemy combatants, all of which were experimented on. When certain experiments were proven not to kill certain subjects, the Program progressed to regular army soldiers and even Delta Force members who had no close family (who "would not be missed"). The soldiers suffered terribly, and eventually one of them led an insurrection.

Grayson completely believes Somers and is outraged at what their superiors have been doing. Ambrose, on the other hand, is a family man who cannot afford to doubt the U.S. Government", any more than I believe that Abu Ghraib shit" and thus does not believe Somers and instead deludes himself to find alternative explanations, causing a rift between him and Grayson.

Nevertheless, Somers rejoins Echo Squad and assures his comrades Weis can explain further. The team, against Colonel Green's direct orders, arrange an extraction point, and fight their way through the Reborn and escape back to BaseCamp.

While Somers is ushered to meet with Weis, Pierce meets with Green, who begins to yell at him for disobeying orders. Before it can go on to mentioning Somers, explosions are heard around the base. Pierce is summoned to the medical center, where the truth is revealed; Somers himself is the Reborn Leader, and, in his hysterical ranting, reveals Weis was the head of the medical research team experimenting on the soldiers in the Reborn Program, and Somers himself refuses to listen to her as she tortured and experimented on him. The Reborn Program itself was shut down and decreed a failure when the subjects proved too difficult to control, and the soldiers were sealed inside Area 51 itself with a massive concrete containment dome, leaving all inside to die. Somers led the others to adapt and survive, and were ready when the current administration re-instated the Reborn Program. Somers used the alien artifact at the heart of Area 51 to punch a hold in the dome, allowing them to escape and fight against their former masters. Somers, after non-fatally shooting Grayson, departs in a Reborn helicopter transport with several captured Area 51 scientists, as the attack on BaseCamp begins.

Pierce, Weis and Ambrose successfully fight off the Reborn and Xeno attackers, ignoring and disregarding Green's orders for the Reborn to be captured alive. After the battle, and Grayson recuperates, Echo Squad is confronted by Green, who is irate they ignored his orders, from the U.S. Joint Chiefs themselves, yet again, and ignore their protests and instead confines them to BaseCamp.

Echo Squad, however, know Somers, seeking revenge, intends to increase power to the artifact, and use it to bring down the U.S. Government. Grayson arranges for some of his pilot friends to transport them to Area 51, intent on stopping Somers. Echo Squad departs just as more Xenos attack BaseCamp.

Echo Squad, despite some difficulties, arrives at Area 51, joining the U.S. 4th Infantry Division as they launch a massive assault on the base, in an attempt to stop Somers from using the artifact before he destroys the world. However, it is too late, as power is drastically increased to the energy beam from the artifact, the shockwaves blowing the helicopter out of the sky and causing it to crash. Ambrose, fatally injured, dies mere seconds later.

Clearing Xeno activity on the surface, Echo Squad descends into Area 51. Battling Xenos and Reborn all the way, the team, as they reach the bottom level, is ambushed. Grayson's rappel wire is stuck, and, as he grapples with a Xeno, the wire snaps and Grayson plunges to his death. Shortly after, Pierce is captured by the Reborn.

Pierce is brought to Somers, who is now attired and equipped just like the other Reborn. Somers gloats that Pierce is already too late; the true danger behind the Xenos is the spores that created them, and the artifact, the power of which Somers has greatly amplified, has released Xeno spores into Earth's atmosphere, and even now Xenos are spreading across the United States. Weis is able to free Pierce before Somers can kill and, while Weis escapes pursuing Reborn soldiers, Pierce, wanting to stop the spread of the Xenos before it gets any further, battles Somers, shutting the artifact down, and, in a massive shootout, defeats and kills Somers.

Pierce and Weis escape in a helicopter as Area 51 collapses, and fly off to see how far the Xeno spores have spread.

BlackSite: Area 51 features standard first-person shooter gameplay. It uses a regenerating health system; additionally the player's character can absorb relatively large amounts of gunfire before dying. The game features 6 different weapons, however only 2 weapons can be carried at the same time. The game also features the ability to use grenades and melee attacks. The game's main weapon, the [M4 carbine]], has a holographic weapon sight that can be aimed through for zooming in on distant targets. The game does not feature the ability to lean around corners.

One of the main features of the game is squad tactics. For almost the entire game, the player will have a team of 2 A.I. controlled squadmates accompanying them. Squadmates can be ordered to move on a location, concentrate their fire on a specific enemy, man a mounted turret, or set explosive charges on certain items. Squad commands are given with a single button; the commands are context sensitive based on what the player points the cursor at. Squadmates cannot be killed, and will only be knocked out for a brief period after taking a certain amount of damage.

The game also features a morale system, where squad morale increases as the player kills enemies or scores headshots and decreases as the player takes damage or as squadmates are injured or incapacitated. At high morale, squadmates fight much more effectively and can survive more damage, while at low morale they contribute much less to firefights, and are incapacitated much more easily.

The game also features several vehicle sections, where the player must drive a civilian van or military Humvee cross-country to reach a location, while dealing with enemy attacks. The player can exit the vehicle at any time to collect items, investigate buildings or man the humvee's mounted machinegun.

The game features 6 different weapons that the player can use. 4 are real-world firearms, while 2 are fictional weapons based on alien technology.

The multiplayer features modes such as Deathmatch, Team Deathmatch, Capture the flag, Siege and Human VS. Reborn. The Siege and Human VS. Reborn are different and unique from other games. It allows the teams to attempt to control each of the level's territories while trying to capture one another. The Deathmatch mode, as well as the rest of the online portion of the game has a maximum number of 10 players and will allow for most of the available maps. There is no split screen multiplayer.

Online Cooperative was planned originally but has since been cancelled on the Xbox 360 and PlayStation 3: http://au.ps3.ign.com/articles/828/828904p1.html

The PC multiplayer mode can only be enabled by registering an account with Midway games.

Add a photo to this gallery 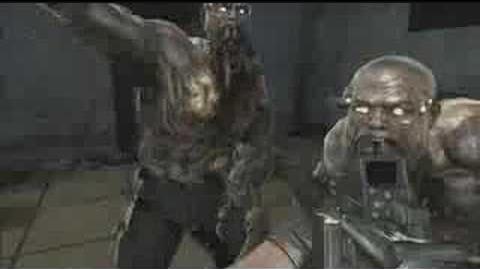 Blacksite Area 51 Trailer
Add a photo to this gallery

Retrieved from "https://area51.fandom.com/wiki/BlackSite:_Area_51?oldid=4903"
Community content is available under CC-BY-SA unless otherwise noted.