The Black Ops are a hybrid race, that has been cloned extensively. They are the result of experiments that attempt to use recombination to combine Alien and Human DNA, thus they qualify as a species of their own. They show excellent combat reflexes and high prowess. They are conditioned to obey orders from both the Illuminati and the Grays.

They appear to lack any kind of empathy and thus work in a highly efficient way when they are cleaning up evidence of the events that took place at Area 51.

They seem to serve as the main combat force of the Illuminati.

Black Ops are first seen after Theta eliminated every member of HAZMAT Team Delta, except Peter Chew and Ethan Cole. They are then encountered after Ethan Cole gains the ability to freely shift between human and mutated form. The first Black Ops that can be found alive is witnessed killing a scientist. From that point on they are encountered regularly and serve as a formidable and organized foe.

The Black Ops are equipped with a wide variety of weapons, both human and alien in origin. Generally they carry both a gun, and some grenades. 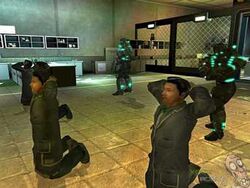 Black Ops ready to execute the Dr. Winston Cray researcher for the cover up
Add a photo to this gallery
Retrieved from "https://area51.fandom.com/wiki/Black_Ops?oldid=4849"
Community content is available under CC-BY-SA unless otherwise noted.