The Grays are an alien race that come from Zeta Reticuli (a dark star). The mysterious Grays have studied humanity for thousands of years to conduct reasearch on human life. In 1947 a Grey scoutship crashed near Roswell, New Mexico, the truth was covered up by the goverment which sealed off the crash site and recovered all four crewmembers who survived the crash. The Illuminati and Dr. Winston Cray made an pact with the Grays that they were allowed to conduct experiments on human test subjects with the help of the Illuminati, the exact purpuse of those experiments are only known to the Grays and the Illuminati.

The Grays have two hearts, a large head and very big dark eyes, their skin color is white and the have four fingers they also communicate using gestures and telephathy

The Grays have a very advance energy weapons and spacecrafts they also using biotechnology to create Thetas, Super Thetas and alien parasites.

The Grays are a species of extraterrestrials and an enemy type encountered in the fifteenth level of Area 51. While they are physically inferior to humans, they possess advanced weapons technology and are shown in game to be capable of creating force fields and spawning Black Ops soldiers to aid them. They have made a pact with the Illuminati to supply them with a biological weapon in exchange for a base of operations on Earth.

The mysterious Grays have studied humanity for thousands of years. Earth's remote location in the backwaters of the galaxy made it an ideal location for the alien race to conduct research that was too dangerous to perform on any of their other homeworlds. Embroiled in an interstellar war with an unknown enemy, the Grays were desperate to develop a super-weapon that might ensure their survival. The natural resources and large population of Earth, combined with the human leadership's corrupt accommodations provide the the perfect facility for the Gray's biological warfare development.

In 1947, a Gray research ship experienced a major malfunction resulting in a crash near Roswell, New Mexico. The United States Government quickly covered up the truth, sealed off the site and recovered the badly wounded Gray named "Edgar" who was transported to Area 51 for study. In the time that followed, major elements of the government were co-opted by the powerful Illuminati, a secret organization of elitists dedicated to ruling the world from the shadows. The Illuminati used their influence to set a new secret agenda for Area 51. A major base was built over the initial laboratory that housed the crippled "Edgar" and the Grays established a research facility three miles below the desert surface. Since then it has served as the only secure landing site for all subsequent Gray vessels.

In time the Illuminati formed a Pact with the Grays, granting them needed resources (including humans for experiments) in return for exclusive access to Gray technology.

For the last twenty years human and Gray researchers have worked in tandem to great effect, creating a creature-weapon codenamed "Theta" intended for use in the distant alien conflict that still raged. One human scientist, Doctor Winston Cray was working with "Edgar" to perfect another viral weapon. It was suspected by Cray that mating the virus with the "Theta" project would yield the super-weapon the Grays had long sought.

However, Cray was tipped off by "Edgar" that the Grays true intentions of the super-weapon would be the annihilation of life on Earth. To divert the Grays' and the Illuminati's attention, Cray released his viral weapon within Area 51 and called for military assistance in cleaning up the viral outbreak.

In the resulting chaos caused by the rapid spread of the virus, a Hazardous Materials Team was sent to try to contain the infection. The sole survivor of the HAZMAT Team Bravo, was Ethan Cole, traveled to the deepest regions of the facility, killing the "Theta" super-weapon and destroying the alien core, thus destroying Area 51.

It can be assumed that Area 51's destruction killed all of the Grays present as well as "Edgar". Despite this, it is unknown if communications between the Grays as a species and the Illuminati have ceased.

The Grays appear similar to the classic Gray alien featured in modern media. They are noticeably shorter than the humans and according to the guide book, measure 4'0" (1.21 meters) tall. Grays are devoid of external features such as noses, ears or sexual organs. Their bodies are very lean, having no muscular definition and appearing rather skeletal save for their enlarged heads. Each Gray has two reflective, almond-shaped black eyes, two slits for nostrils and a single slit for a mouth. As their name implies the tone of their skin is a light gray color. In all appearances within the game, Grays do not wear any form of clothing nor have any form of designating one Gray from another.

When confronted they create an energy shield around themselves and throw glowing orbs that emerge into Illuminati Black Ops. The sheilds they have take alot of attacks to kill and making physical contact with the sheild will send a damaging static shock at the aggressor. They have unlimited Black orbs, though only send out 2-6 at a time.

The Gray Multiplayer Avatar is a Area 51 multiplayer avatar unlocked by finishing the The Last Exit on hard. 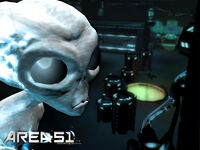 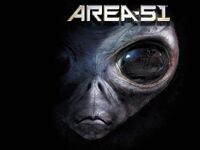 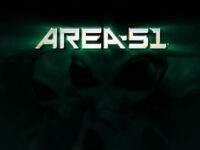