"The tides of history have left me little choice. And once again science will require the sacrifice of the insignificant."

Theta is a biological hyper-infector that's engineered to kill and infect, and nothing else. It was bio-engineered to spread the mutant contagion as quickly as possibly to any carbon based enemy. This makes Theta an impressive killing machine.[2]

Internal biology shows both bio-engineering and nano-structural engineering. For 'bones', the Theta appears to have a complex lattice of compounds, the frame of which is the higher Titanium. Once past battle-scales and to the internal structure, equally huge arteries feed the musculature, brain, and contagion sacs. Organs are wholly alien, yet seem constructed and not evolved.[2]

Dr. Winston Cray released the Theta to stop the Grays and the Illuminati from completing a pact. HAZMAT Team Delta is the first to find Theta when they open a lift. Later on, after fending off a large group of mutants and blasting a wall that paved a way for escaping, Theta appears yet again between them and their escape route. Delta Hazmat squad is massacred, Ethan Cole and Peter Chew being the only survivors by chance.

Ramirez and Crispy were on the other side of a blast door when a large explosion causes Ramirez to send Crispy over to check it out. Crispy is infected and when Ramirez goes over to save him he is thrown against the blast door and instantly died.

The Theta is finally confronted at the mothership entrance and finally killed by Ethan Cole after a thorough battle. 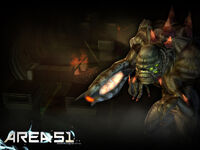 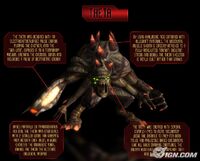